Antoniadou on economy at Ledra Palace

Posted at 10:05h in Ανακοινώσεις by adminedi 0 Comments
0 Likes
Share

Address by
Praxoula Antoniadou Kyriacou, President of United Democrats
At meeting of the Leaders of Greek Cypriot and Turkish Cypriot Political Parties meeting at Ledra Palace on 27th September 2012,  hosted by the United Democrats

‘’The way out of recession and forward to a common future of growth, peace, prosperity and further integration in the European Union family’’

It is true that the international financial crisis had adversely affected external demand for sectors such as tourism and construction, causing economic growth and tax revenues to decrease and Unemployment to rise. But the initial impact of decreased external demand was manageable and could be easily turned around with some daring policy moves and with the economic recovery in some of our major markets.

Unfortunately, however, rather than concentrating on containing the initial impact of the crisis, the banking sector in the south treated the crisis as an opportunity to gamble and took away €44 billion  of the country’s wealth and placed it into Greece. €20 billion out of these €44 billion had been invested in Greek bonds and are already lost, while the remaining €24 billion –which comprise loans to the private sector- are at high risk of being declared as bad debts.

And all this was done under the watchful and encouraging eye of the Governor of the Central Bank and the fervent support that both the Minister of Finance and the leaders of the opposition handed out to the Governor. The Minister of the time is unfortunately burdened with the additional heavy responsibility that he didn’t have the foresight to advise the President to negotiate the haircut with reference to the investments of Cyprus in Greek bonds, so that not all our wealth would be handed out to Greece.

In 2004, one of the main reasons why Greek Cypriots decided to vote against the proposed solution in the referendum was the fear created that they would have to pay an amount of around €10 billion to finance the reunification of their country. In 2012 no referendum was held and nobody asked the people whether they were willing to hand out €44 billion -2.5 times the GDP of our country- to Greece.

In 2004, Greek Cypriots were led to fear that reunification would eat down the fast economic growth and high standard of living enjoyed by them at the time. That neither division nor high growth rates were sustainable remained a well kept secret and whoever tried to explain it was marginalised as a dissenting voice of treason and heresy.

The United Democrats have persistently pursued the cause of Reunification over the years and though their loyalty to this vision has caused them severe electoral loss, we consider that recent developments especially in the energy sector, offer a renewed opportunity for peacefully reunifying the island into a growth creating federation, offering prosperity to all Cypriots as well as to our European Union family.

We consider that what Cyprus currently needs is responsible leaders to treat the energy factor as an opportunity for peace making, not as an opportunity for power building. Neither Cyprus nor indeed Turkey can risk playing regional power politics in the Eastern Mediterranean. Especially now with Presidential elections round the corner, it may be tempting for candidates to appear to be playing tough against Turkey. But if we really want conciliatory attitudes to be adopted by everybody, including Turkey, then the emphasis of our arguments should be the common benefits that will accrue to all concerned once the Cyprus problem is peacefully resolved and the island reunifies, rather than threat of discipline.

Once we decide to move forward, Cyprus can certainly and easily become a pole of peace, reconciliation and cooperation in the area of the Eastern Mediterranean, linking the peoples and the economies of the area to those of Europe to the benefit of all concerned.

The emergence of the area of the Eastern Mediterranean as a new source of Energy for Europe obliges all countries in the area to think outside their narrow national borders and problems and consider how this new variable in the equation of the area can be jointly addressed in a way that it will yield growth and prosperity for all, including our European Union partners. It is a time of joint responsibility towards both the peoples of the Eastern Mediterranean as well as towards the people of Europe. This is the time for Turkey, Cyprus and Greece to resolve their problems of the past, as is also the time for Israel and the Arab countries to do the same. For once the moment is not seized what will remain may again be regrets and ruins.

There is a leadership challenge also for Turkey:

Turkey has a real opportunity to become a true leader and peace maker in the area of the Eastern Mediterranean. The Government of Prime Minister Erdoğan can prove that it is transforming Turkey to a country of true European outlook. Internally it can prove that it is governing on the basis of European values, primarily of freedom, democracy and respect of human rights, while in its external policies it can prove that respect can be gained not only on the basis of military strength but also on the basis of peaceful cooperation creating mutual benefit, in areas that address the future of the area, rather than to persevere on anachronistic problems of the past.

As pointed out in a recent article co-authored by Sir Graham Watson MEP -the leader of the European Liberal Democrats- and the President of the United Democrats , ‘’The discovery of natural gas in Cyprus could serve to bring home the possibility of a win-win outcome. However it will require wise political management on the part of all parties involved.’’ ‘’ The resolution of the Cyprus problem in a way that will reunify the island will allow all the Cypriots to participate in the economic development and to share the benefits that the exploitation of the island’s natural wealth will bring.

At the same time, it will allow the normalisation of relations with Turkey, so that Cyprus and Turkey can become partners in peace to the benefit of all the Cypriots, Turkey, Greece and of the whole area of the Eastern Mediterranean. Such a development  will also benefit the European Union in its entirety, since the Union is currently looking for new sources of natural gas as a bridging solution until the fuller inclusion of renewables in the energy balance can be accomplished. The Southern gas corridor envisaged by the proposed regulation on Trans-European Energy Infrastructures is but a case in point. ‘’

It is worth noting that Cyprus is currently fully dependant on imports of oil for its energy needs. Oil imports, amounting to €1,3 billion per year are the dominant factor burdening the current account deficit of the country and maintaining production costs high, while they also contribute to the pollution of the environment.  Approximately half of these imports are used for electricity production. Hence, on an opportunity cost basis, the 7tcf gas discovery during recent exploratory drilling in block 12 amounts to a value of nearly €130 billion at today’s oil prices, given that Cyprus consumes 1,5 bcm per year.

In their ‘’The Day After’’ trilogy  the three ladies had explained how the reunification of Cyprus would yield huge economic benefits to all the Cypriots as well as to Greece and Turkey. In quantifying the benefits of reunification, they found that Cypriots will benefit from a peace dividend of €12000 per year per family, as a result of a three percentage increase in GDP growth per year –over a five year period- which would also give rise to the creation of 33000 new jobs.

They based their findings on the opportunities for trade in goods and services between Cyprus and Turkey that would be unblocked once an agreed solution is found that would be reunifying the island and the relations between the whole of Cyprus and Turkey would normalise. Exports of goods to Cyprus from Turkey and exports of services from Cyprus to the vast neighbouring Turkish market would start flowing in significant and increasing numbers, given the complementary strengths of each economy in the respective areas. Furthermore, the removal of political uncertainty would lead to increased flows of Foreign Direct Investment not only to Cyprus but also to Turkey and Greece. A significant boost to economic growth will also be given by the reconstruction effort, in the sense that new infrastructure and housing will be required, especially with reference to the re-built of the ghost city of Varoshia, as well as in association to any resettlement that a solution may involve.

Some recent attempts by opponents of the solution to hugely augment the estimated cost of reconstructing Varosia –fenced part of Famagusta- and hence to discourage people away from solution, stand to be checked by the detailed studies of the Three Ladies which have estimated this cost to only €1,8 billion, in their Day After II: Reconstructing a Reunited Cyprus.

Reduction on armaments will certainly be conducive to the efforts currently made by the European Union family to bailout the Greek economy and keep it in the Eurozone.

Demilitarisation will also relieve the public finances of Cyprus from an unsustainable burden and will contribute to the efforts which have started by our EU partners to bailout the Cypriot economy, following primarily its huge exposure to the Greek economy.  It will also relieve the young men of Cyprus of a compulsory two-year army service.

Reunification on the basis of the agreed framework of a bizonal Bicommunal federation with political equality is the only way ahead forward for the Cypriots. It will bring back a growth impetus to the whole Cyprus economy both through the reconstruction investment and new investment that will flow into the country, once political uncertainty is removed. A new growth impetus will most certainly be created through the peaceful exploitation of the new opportunities that await our decisive move: trade with all our neighbours and peaceful cooperation with all the neighbours in a way that the Energy factor can yield benefits to all countries in the area as well as to our European Union partners.

The United Democrats call upon the Cypriots to courageously grasp the opportunity of the moment to get out of the misery of the past and out of economic disaster and move forward to a new time of peace, cooperation economic growth, employment and prosperity that the decision to reunite our country will bring. 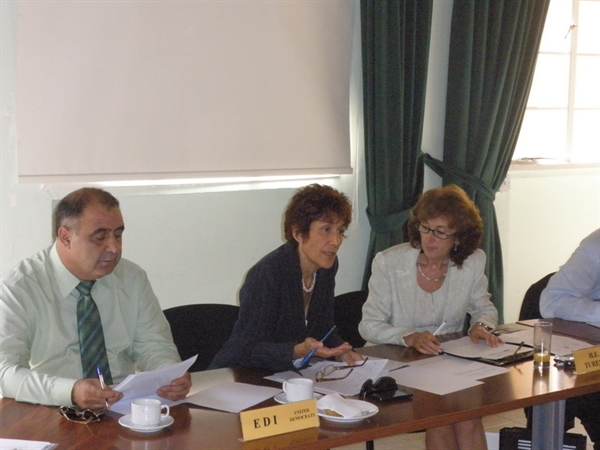